Step One: In and Out of the Closet

As I said in the introduction to the project, I’ve learned to hide a lot of my clutter–mostly in closets and the Dreaded Spare Bedroom (DSB).  While clearing out the DSB is my ultimate goal, I’m not going to start there.  It’s WAY to complicated.  Rather, I’ll begin with a modest closet: 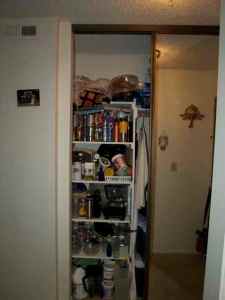 This closet is right next to my front door and just outside my kitchen.  I’ve had a hard time figuring out exactly what should go in here so there’s lots of different categories of items on the shelves.  Many of those categories eventually found better places to live, but the stuff that got shoved in here never came out.  My goal: get rid of everything I don’t need, move stuff that has another home to its home, organize what’s left.  I’m really hoping that at the end of my work, this stuff will fit in there too: 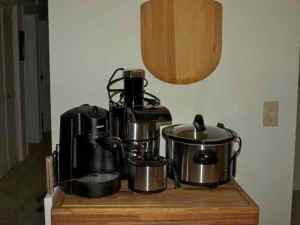 I thought I’d start with this shelf because it’s sort of the worst, and it’s also got the most stuff that I know will come out of here: 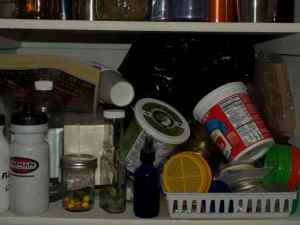 Looks like something very bad happened under all that stuff: 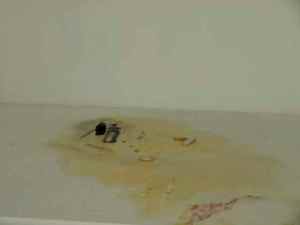 Ultimately, there will need to be some sandpaper and paint, but for now a good scrubbing and shelf-paper and voila: 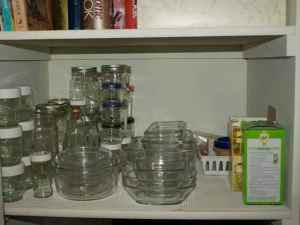 It really only took a couple hours to get things moved out, thrown out, recycled and rearranged, and yes, all the small appliances fit in there just fine:

Oh, wait, did I forget to mention the other-side of the closet?  Oops!  Really, it’s not any where near so bad: 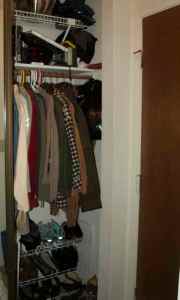 Just a move this there, take that out, and…

Much better!  It does occur to me that I probably have more coats and sweaters than I need here, but I’m going to save that for when I tackle clothes.  For now, I am pleased.  My hall closet opens and closes easily.  I can see everything that is in there so finding stuff should be much easier, and I won’t feel ashamed if I need to get something out of here when someone is visiting.  Step One accomplished.  Now on to Step Two: The Laundry Closet.

Introducing Project EiiP (Everything in Its Place)

Welcome to a project that has been bubbling for years; a dream demon that has hitched a ride on my shoulder for far too long.  When did I start talking about having too much stuff?  When did I start my first my first campaign against clutter?  Thinking back now, it seems like it was probably around the same time as my first attempt at dieting.  And like my diets, my attempts at clutter reductions have all failed.  Once, a roommate of mine complained about my pile of books about reducing clutter!  Those books are still stashed around my house along with myriad books about nutrition and healthy eating.  Just like the 20 pounds I would like to lose, the piles of half-read books and half-done projects remain.  They follow me through moves, through life changes, and they grow, sometimes slowly, sometimes quickly.  Periodic campaigns shrink them for a time, but eventually the stacks of paper return, the pieces of unfinished craft-work are left out to be completed and then abandoned.  I get busy.  Work takes over my life.  I’ve got a million excuses.

The truth is, I come from a family of pile-makers and clutter-stashers.  When I visit my folks, I know exactly where my clutter-demon came from.  I was trained from an early age to keep everything just in case one day I might want/need it.  That old tool, sure you can’t use it for what it was intended, but it might be useful for something else.  No, I don’t know what, but next week, next year, who knows?  One day I might really need a screw driver that is bent in half.  It might come in really handy.  Better just stash that somewhere.  Those rubber-bands and twist-ties–you can never have too many of them.  Find a stray washer or nut or screw, better stash that away.  And don’t even think about getting rid of those old magazines and catalogs!

Don’t get me wrong.  We’re not hoarders.  My home is not a giant fire-hazard or rodent’s den.  In fact, I wouldn’t even be that embarrassed if company showed up unexpectedly.  See, here’s my main living space, not too bad, right?

But, don’t look in the closets, and don’t go in the spare bedroom…

And thus comes Project Everything in Its Place.